This program provides monthly cash transfers to every adult in a village.
Today, most of these funds are delivered in Kenya.

GiveDirectly is currently running basic income programs in some of the poorest parts of Kenya, Malawi, and Liberia. Every eligible adult in a target region receives a monthly cash transfer specifically sized to lift them above the local extreme poverty line.

Since 2017, GiveDirectly has led the world’s largest and longest term study to date studying the effects of a Universal Basic Income. As part of this $30M project, we have distributed millions of dollars to 20,000 individuals living across 197 villages, and an additional 100 villages have been surveyed as a control group. Some individuals will receive payments for 12 years, and the full study will last at least that long. Initial results on the effects of UBI during COVID-19 were released in September 2020; additional results from the first endline survey are in progress. 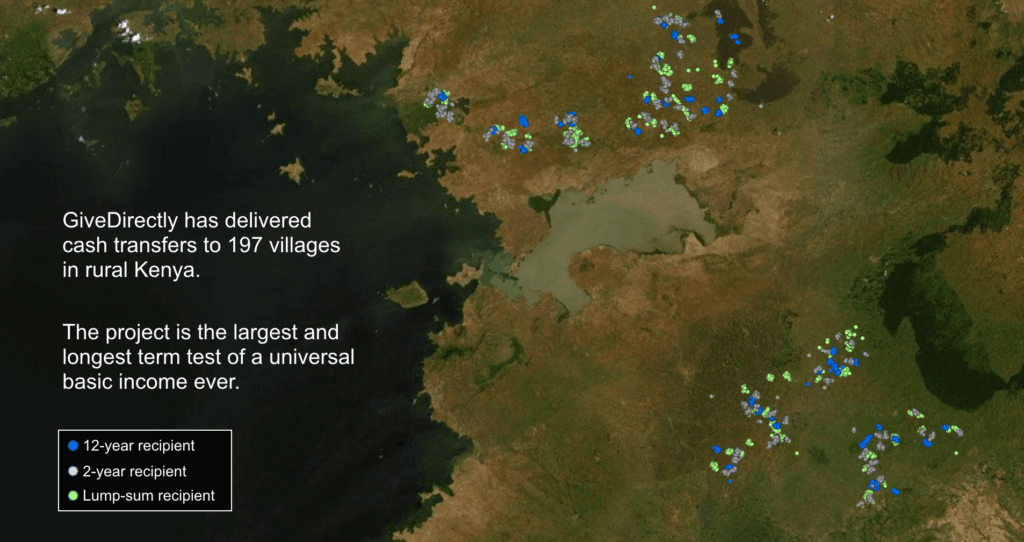 In addition to GiveDirectly’s co-founders, Michael Faye and Paul Niehaus, the research team includes leading economists like Abhijit Banerjee, co-founder of J-PAL and a professor at MIT and Tavneet Suri, Scientific Director for J-PAL Africa, also at MIT.  The study design was also led by Alan Krueger, a former Chairman of President Obama’s Council of Economic Advisers and professor at Princeton. Innovations for Poverty Action (IPA), an independent non-profit, will conduct any research-related surveying of cash-recipients and members of the control group. Click below to learn more.

Treatment Groups: As part of a randomized-controlled trial, each of 295 rural villages in Western and Rift Valley region of Kenya were assigned to 4 groups:

Pilot villages: GiveDirectly selected an additional 2 villages to receive monthly payments for 12 years. People living in these villages are not part of the formal research study, enabling GiveDirectly and others to have more in depth, qualitative conversations with them about what it’s like to receive a basic income.

Survey Data: Baseline responses have already been gathered in each village, collecting answers from four different groups of people: household heads and spouses to understand household level-conditions; village elders to measure village-level changes; and owners of local enterprises to understand the effects on the local economy.

Mitigating bias: IPA staff conduct all research surveys independently of GiveDirectly. The study’s authors publicly registered the study to ensure they can be held to account for publishing its results, whatever they are. They will also publish a pre-analysis plan that will guide how analysis is conducted before any outcome data are analyzed to prevent cherry-picking.

Program Efficiency: We expect 85% to 90% of funds raised for the program to be delivered as cash to participants in the program. Research costs borne by IPA are funded separately by private funders.

What we’ve learned so far: First results on the impacts of a basic income on recipients during COVID-19 showed transfers improved well-being on measures such as hunger, sickness and depression in spite of the pandemic, with modest effect sizes. Researchers also noted that recipients reduced hospital visits and decreased social (but not commercial) interactions, implying potential public health benefits. During the pandemic, recipients lost the income gains they previously accrued from starting new non-agricultural enterprises, but also suffered smaller increases in hunger. Results from the full first endline are expected later this year.

What won’t we learn? No single study can confidently predict how a UBI would work all over the world. Effects may differ in countries that are wealthier than Kenya, or in more urban or more remote areas. The effects of UBI are likely to differ in the developing world and the developed world.

Additionally, the basic income in this study is universal within villages, but not country-wide. The study won’t fully capture the effects of implementing a UBI at a national level.

How is this different from prior studies of UBI?
This study is the largest, long-term, randomized evaluation of a universal basic income: How are villages selected for the trial?
GiveDirectly worked with the research team to select rural sub-counties in Western and Central Kenya where we had government authorization to operate. Researchers selected a pool of 295 comparably sized, rural villages, randomly assigning each to one of three treatment groups or the control group. Each of those groups was sized to maximize expected statistical power within the constraints of the program budget.

When will we see results?
While payments for the long-term group will continue for 12 years, initial results from the first endline survey will be available later this year. A working paper on the effects of a universal basic income during COVID-19 was released in September 2020. Follow-up research will take place every 2 to 5 years following.

Send a basic income to people in extreme poverty